It's a balmy summer evening, and you're sitting with your family on the terrace, playing a few games. A perfect evening — that comes to a sudden end as a flock of mosquitos is lured by the light of your lamp!

In Mosquitozzz, you have to fight off the attack of this swarm to lose as little of your blood as possible. To keep yourself from being stung, you cover yourself with many repellents, and if all else fails, you still have your hand ready to slay the attackers. How will you defend yourself against the mosquitos?

Mosquitozzz can be played either competitively or co-operatively.

At the end of a turn the player sends all remaining mosquito cards from his hand into the swarm and gives the lamp card to another player.
The swarm follows the light and then attacks this player. Before the active player can defend himself against the swarm the other players have the opportunity to play one concealed card.
They can either play a mosquito card which will reinforce the swarm or a defense card to support the active player (e.g. in the co-operative play).

While defending against the mosquitoes the player can play a card named "Flache Hand". Normally you play at least one card of this kind in your turn.
If you do, you take a number of markers inside your hands, shuffle them and slap them on the table.
The markers show a living mosquito on one side and a dead mosquito on the other side - so this slap determines how many mosquitoes finally survive the player's defense.
It is allowed to play multiple cards "Flache Hand" in a row.

- Target of the game

Each player starts with 10 drops of blood (wooden).

Competitive play:
The game ends when one player runs out of blood. The player who has the most blood drops left wins the game.

Co-operative play:
The players win the game as a team if no player runs out of blood until the deck of "mosquito cards" is empty. 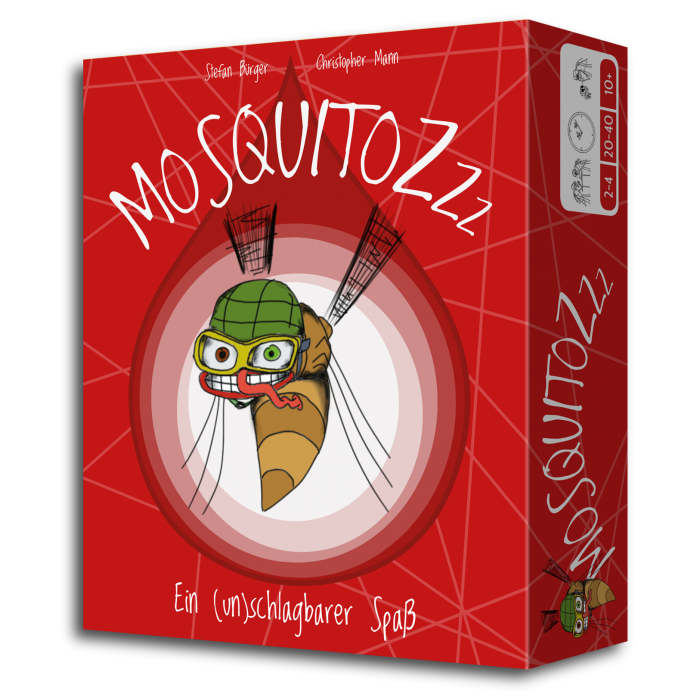